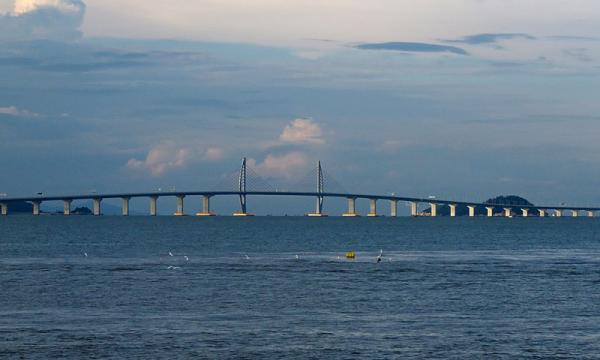 The 34-mile bridge was launched after nine years of construction.

Bloomberg reports that the world’s longest sea-crossing bridge has finally opened after nine years of construction in a move that marks deepening integration with the Mainland as part of the Greater Bay Area (GBA) project.

The 55 km (34 mile) Hong Kong-Macau-Zhuhai bridge which costs roughly $120b (US$15b) to build is expected to carry around 29,000 vehicles and trucks daily and cuts driving time from Hong Kong to the two cities from 4 hours to around 45 minutes.

Widely regarded as an engineering marvel, about 400,000 metric tons of steel or enough material to build 55 Eiffel Towers, according to the Hong Kong Bridge Authority, was used to build the bridge which crosses the Pearl River Delta from Lantau Island and goes through Macau.

The sea bridge is the latest effort to integrate Hong Kong with the Mainland after the city plugged into China’s high-speed rail network last September.

The GBA is a connectivity scheme by the Chinese government to link Hong Kong, Macau and nine cities in the Mainland including Guangdong and Shenzhen into an integrated economic center. With 67 million residents, the GBA would constitute a trillion-dollar economy and zoom past Japan as the world’s fourth largest exporter, HSBC said.

“The bridge will bring Hong Kong, Zhuhai and Macau closer together as a ‘tourism triangle’, driving demand for shopping complexes, integrated resorts and MICE facilities in all three cities. Already home to the Hong Kong International Airport, the opening of the bridge enhances Lantau’s importance as a gateway and regional logistics hub,” Marcos Chan, head of research, CBRE Hong Kong, Southern China & Taiwan said in a statement.