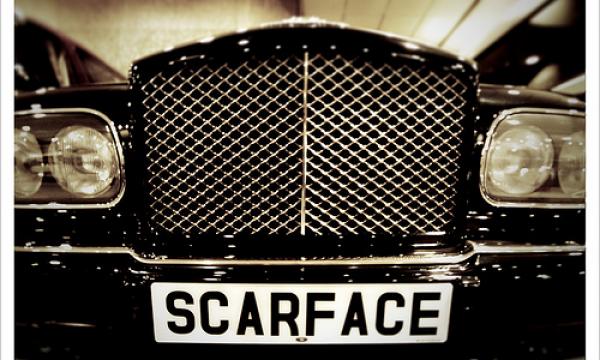 It is hard not to smile when a car drives past bearing a licence plate proclaiming “1 AM FAT” or “HEHEHAHA”. For the owners who pay top dollar for a few craftily arranged letters or numbers though, personalised vehicle registration marks are no laughing matter.

Since the Transport Department introduced the personalised plates scheme in 2006, it has sold 15,958 of them through 67 auctions, raising $242.9 million. Many are creative and catchy, revealing something about their buyer’s character. As fewer original ones remain available, they reveal even greater ingenuity each year.

Clever car owners have made use of the two-row format to create simple designs or faces using letters and numbers. In one example, two “0”s separated by a space on the top row, and a capital letter “V” in the middle of the bottom row form a smiley face.

Some inventive combinations raise eyebrows: Why did a buyer choose “DD MM YY”, presumably standing for date, month and year? Others raise chuckles, as well as cash: The mark “HAHAHAHA” sold for $65,000 while “HEHEHAHA” cost $95,000.

Money can buy ‘LOVE’
Personalised plates that include the combination “L0VE” or “10VE” are sought after, and about 40 such marks have been sold. “1 L0VE U” holds the record for the highest bid ever. It sold in the first auction in 2006 for $1.4 million.

“I had no intention to buy these two marks in the very beginning. I planned to buy another one. But I found my favourite word on the auction list – ‘love’ – I like this word very much,” Ms Suen said.

“The world needs love. Everyone needs love. Love makes the world more beautiful. So I bought these two marks and I think they are both good value for money.”

Less is more
Over the years, simple marks bearing just two capital letters such as “AY” or “HC” have proven popular. In the September 2007 auction, 245 marks were sold, raising a total of more than $6.8 million. Almost half of the money raised, more than $3.1 million, was from the sale of just 11 marks with two capital letters.