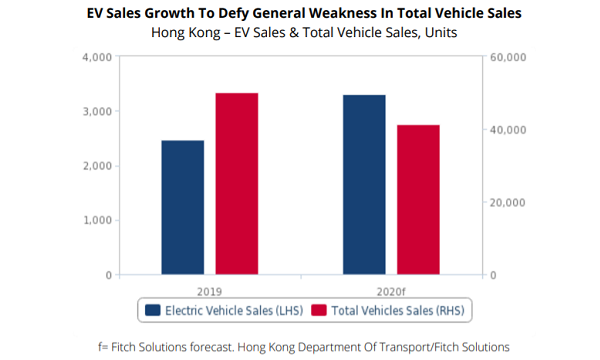 Government schemes are tipping the demand away from ICE vehicles.

The demand for electric vehicles (EV) in Hong Kong is slated to remain elevated in 2020 despite constraints in spending, according to a Fitch Solutions report.

Higher incomes relative to the Asian region will drive demand for EVs as the affordability constraints seen in many other markets are reduced. EV sales may expand by 34.5% in 2020 to reach 3,315 units, on the back of a strong performance in Q1 when sales skyrocketed 408% YoY.

The report also noted that this figure in EV sales growth will significantly outperform the total vehicle sales in the SAR. “We currently forecast total vehicle sales to contract by 17.4% in 2020 to reach 41,433 units, as growing political risks combined with an expected economic contraction in 2020 leads to sales contracting further,” Fitch Solutions said.

This has led to EVs being competitively priced relative to their ICE counterparts, which combined with higher incomes in Hong Kong will result in the EV market proving resilient in 2020. Incentives also include commercial vehicles and motorcycles in the FRT concession scheme, which may bode well for the general adoption of EVs in Hong Kong as it opens up opportunities for a broader adoption of EVs by consumers and businesses.

Further supporting the positive outlook for EVs is the $2b subsidy announced in 2019 to expand the country’s charging infrastructure, which will go a long way in solving range anxiety issues for many willing buyers. Fitch Solutions cited data from the Environmental Protection Department, where there were 2,968 installed EV charging stations for public use at the end of March with plans to add more in the coming years. This will then increase the practicality of EV ownership, thus amping up demand.

“Downside risks to our outlook remain as the possibility of the FRT concessions not being renewed after the deadline in 2021 could result in a significant increase in EV prices which would dampen demand significantly. This is due to the significantly high taxes charged on vehicles registered for the first time in Hong Kong,” the report noted.

It added that the last time that an incentive scheme expired was in 2017. There was an 87.5% decline in EV sales in 2018, following a surge in March 2017, when individuals rushed to buy EVs before incentives expired that same year.

Fitch Solutions cited two likely scenarios playing out in its EV forecast for 2021 and 2022. Should EV subsidies be allowed to expire, sales could expand by 35.7% to reach 4,500 in 2021 driven by higher monthly sales figures before the incentive deadline. With the EV market turning negative the following year, it may plunge 79.8% to 909 units. This is in line with a similar scenario in 2017 when individuals rushed to buy EVs prior to incentives expiring.

The second scenario involves the introduction of new incentives or the extension of existing ones prior to the deadline of end of March 2021, which would result in EV sales jumping 25.6% to 4,163 units, followed by a 24.8% spike in 2022 to 4,546 units. “We therefore view the extension of incentives being critical in the acceleration of EV sales in Hong Kong.”