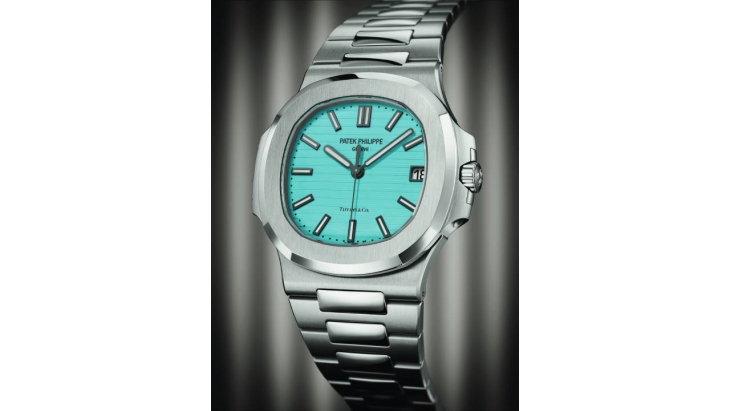 The manufacturer launched a limited-edition of Ref. 5711/1A-018 Nautilus wristwatch.

Patek Philippe has created a limited-edition of Ref. 5711/1A-018 Nautilus wristwatches in steel endowed with famous Tiffany Blue® dials to commemorate its long-lasting partnership with Tiffany & Co.. Unique to these timepieces is the dual stamping of both companies—Tiffany & Co. at 6 o'clock paired with Patek Philippe at 12 o'clock. This casually elegant icon premiered in 2006 and will retire from the collection in 2022.

With the horizontal relief embossing, a Nautilus signature element, the legibility of the dial is amplified by baton hour markers as well as baton hour and minute hands, all in blackened white gold with luminous coatings and features. The inimitable design of the case, the bezel, and the integrated steel bracelet are emphasized by the refined sequence of satin-finished and polished links applied by hand in a process that requires 55 production steps to complete for each watch.

The rugged case is water-resistant for up to 120 metres. It accommodates the self-winding calibre 26-330 S C, a movement that features various technical innovations and optimizations as well as a stop-seconds mechanism that allows the time to be set with one-second accuracy. The sapphire-crystal case back bears the commemorative inscription “170th Anniversary 1851-2021 Tiffany & Co. - Patek Philippe“. It pays tribute to the 170-year shared vision and the historic ties that link Patek Philippe with the United States.

Only a total of 170 units will be available exclusively in the Tiffany boutiques in New York, Beverly Hills, and San Francisco that carry Patek Philippe. Tiffany & Co. will auction off one of the commemorative watches with Phillips in Association with Bacs & Russo on 11 December, with 100% of proceeds benefiting The Nature Conservancy, a global environmental organization.

170 Years Together
Both Patek Philippe (1839) and Tiffany & Co. (1837) were founded around the same time. From the onset, the Genevan manufacture and the American jeweller have always shared the same values—a quest for perfection, a passion for artisanal skills, and a top-tier appreciation and service for customers.

In 1851, Patek Philippe and Tiffany & Co. forged an agreement that made the American jeweller the first official retail partner for Patek Philippe timepieces in the U.S. market. On the occasion of the first business trip to the new world, Antoine Norbert de Patek reasserted the special nature of the relationship and paid a visit to Charles Lewis Tiffany in New York. On his departure, he was deeply impressed by the business volume of the luxury jewellery retailer and by a large order of 150 watches.

In 1876, the two companies signed a new agreement that appointed Tiffany & Co. as the general representative for the United States “who safeguards the interests of Patek Philippe & Cie. as if they were its own interests”. Conversely, the Genevan company pledged to safeguard the American jeweller’s interests as evidenced by the huge façade sign “Agents for Tiffany & Co., New York” at Patek Philippe’s historic headquarters facing the Grand Quai. On the premises of the same Patek Philippe Salons in Geneva, there is further proof of the solid transatlantic relationship: a large steel vault formerly owned by Tiffany & Co. and decorated by an American eagle sporting two flags.

In the period from 1900 to 1930, Tiffany & Co. also played a key role in the relationships between Patek Philippe and major American timepiece collectors such as Henry Graves Junior for whom the manufacturer crafted an extensive range of complicated watches. In 1946, the grandfather of the manufacturer's current president Thierry Stern founded the Henri Stern Watch Agency in New York. It actively nurtured the continuation of the successful partnership.

In 2008, Patek Philippe intensified its relationship with the American jeweller and opened a boutique within the famous Tiffany retail venue on Fifth Avenue that is currently undergoing extensive renovation. The manufacturer's complete current collection can be admired here.

Since the beginning of the third millennium, Patek Philippe has created several limited special editions for the American partner; they recall important dates and bear dual stamps for both brands. Today, Tiffany & Co. is the world’s only retailer whose name appears on a Patek Philippe dial, making these watches highly sought-after with collectors.

The previous limited editions Patek Philippe made especially for Tiffany & Co. are the following:

Launched in 2001 to celebrate the 150th year of partnership between the two companies, the

Annual Calendar was the first limited edition created by Patek Philippe for a U.S. retailer. As a special feature, the month indication was shown as a numeral. A total of 450 watches were made: 150 in rose gold, 150 in yellow gold, and 150 in white gold.

Launched in 2009 on the occasion of the first anniversary of the Patek Philippe Boutique at Tiffany & Co. on Fifth Avenue in New York, this art deco-inspired Gondolo ladies’ wristwatch featured a tonneau case and a guilloched dial decorated with a two-row diamond setting. Fifty watches with white and 50 with black dials were created.

Presented in 2012 on the occasion of the fifth anniversary of the Patek Philippe Boutique at Tiffany & Co. on Fifth Avenue in New York (2013), this Gondolo ladies' wristwatch features art deco accents and a slightly cambered tonneau-shaped case with two rows of diamonds and large rhythmically arranged Roman numerals. Its edition was limited to 25 watches with a blue sunburst dial and 25 watches with a mother-of-pearl dial.

This white gold men’s watch with an Annual Calendar comes in a limited edition of 100 timepieces. It displays the day of the week and the month in a double aperture at 12 o'clock and has an analogue date at 6 o'clock. The back is graced with the engraved inscription “Patek Philippe – A Shared Vision – 2008- 2013 – that recalls the fifth anniversary of the Patek Philippe Boutique at Tiffany & Co. on Fifth Avenue.