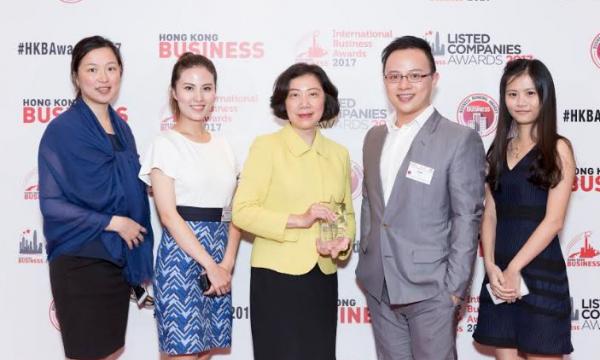 China Resources Power Holdings Company’s (CR Power) project won in the Energy category of the 2017 Hong Kong Business Listed Companies Awards thanks to its Energy Conservation and Emission Reduction project. The accolade was received by Wang Xiao Bin, an executive director and CFO of the company and Karl Ho, head of investor relations.

Dedicated to resource conservation and environmental protection, CR Power is currently taking strides in renewable energy and carbon footprint reduction. In 2016, its in-house self-optimising system for coal-fired power plants was adopted by a second batch of 18 plants, reducing their coal consumption. Simultaneously, 24 coal-fired units were upgraded with ultra-low emission facilities.

In the same year, the average net generation standard coal consumption rate of its subsidiary coal-fired power plants was 305.0g/kWh, representing a decrease of 2.0g/kWh as compared to 2015. Emissions of sulphur dioxide, nitrogen oxide, and particulates also decreased by 0.07g/kWh, 0.07g/kWh, and 0.02g/kWh, respectively.

By the end of 2016, 49 generation units with a total attributable operating capacity of 21,211MW were fitted with ultra-low emission facilities—78% of the attributable operating capacity of the company’s subsidiary coal-fired power plans. With this higher-than-industry-average figure, along with various other achievements in environmental protection, CR Power and its subsidiaries were showered with awards last year, and continues to receive commendations to this day.

CR Power uses the most advanced technologies to enhance its competitiveness and efficiency, lower its overall unit cost, and further improve its profitability. It promises its stakeholders its continued strong performance in social responsibility, financial performance, and sustainability.