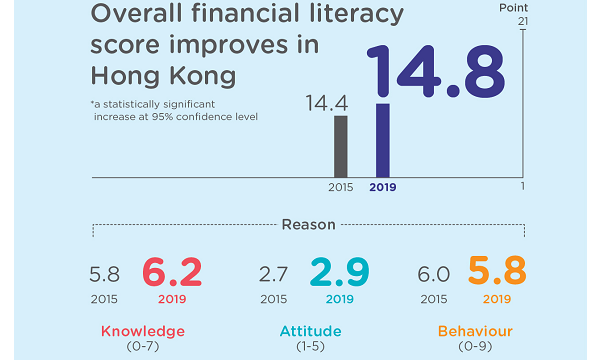 Hong Kong nabbed the top spot in terms of financial literacy globally, followed by Slovenia (14.7) and Austria (14.4), according to a survey by the Investor and Financial Education Council (IFEC).

The market also achieved top position in the area of financial knowledge and ranked sixth in behaviour, and 14th in attitude.

In comparison to the results shown in 2015, IFEC stated that Hong Kong adults have shown improvement in financial literacy, bolstered by better financial knowledge and attitude scores. However, findings also suggest that their financial behaviour score got weaker over the same period.

The study noted that the build-up of financial knowledge is evident across all population segments, notably with the mature segments, such as mature working adults (age 30 to 49), pre-retirees (age 50 or above) and retirees, contributing to the higher financial attitude score.

In contrast, the average financial behaviour score across all population segments dropped from 6.0 in 2015 to 5.8 in 2019.

Weaker financial security
The survey found that only 39% of respondents were satisfied with their financial status, a drop from the 46% in 2015. The number was even lower at 23% amongst young working adults below the age of 30. Nearly half (48%) of the surveyed young adults felt that their financial situation limited their ability to do things of importance to them. The student and young working adult segments were more likely to be financially concerned about whether they could cover day-to-day expenses, IFEC said.

Economic uncertainties have driven people to give more consideration to emergency funds, evident by the number of respondents with enough emergency savings to last for six months or more has grown from 37% in 2015 to 55% in 2019. Individuals with financial goals went up from 52% in 2015 to 60% in 2019, with mature working adults (82%) and pre-retirees (70%) being more proactive when compared with students (32%) and young working adults (53%).

The survey findings also provided insights into areas of improvement for the general public, such as making conscious purchase decisions, paying bills in a timely manner, and keeping a better watch over one’s personal financial affairs.

Other less desirable financial behaviours include not actively managing Mandatory Provident Fund (MPF) or Occupational Retirement Schemes (ORSO) schemes, with only 47% of working adults having reviewed their MPF/ORSO statements, whilst 11% admitted that they never do so.

Amongst those without individual health insurance policies, one in five said they had not considered their protection needs and 50% have compared product offerings from different financial institutions before making a purchase in the past two years.

IFEC added that distinct financial behaviour patterns can be seen across generations. The more mature generation plans and manages their finances more prudently, whilst the younger generation tends to put financial planning aside in favour of a ‘live for today’ attitude.

Younger people are more likely to overspend and end up in debt. According to the survey, one-fifth of all respondents spend more than they can afford at times, whilst 12% are in debt. Amongst young working adults, the numbers rose to 35% and 32%, respectively. Young working adults are more likely to settle their credit card bills with minimum payment, with some 27% of have done so at least once in the past year, compared with 7% of all respondents.

As a result, IFEC noted that this segment is less likely to set financial goals (53%) when compared with all respondents (60%).

“Whilst each life stage comes with a different set of financial goals and challenges, our research shows that the young generation is more financially vulnerable. This is the generation that will play an increasingly pivotal role in our economy, and we need to provide them with the financial education and support to help them secure their future,” IFEC Chairman Lester Huang said.