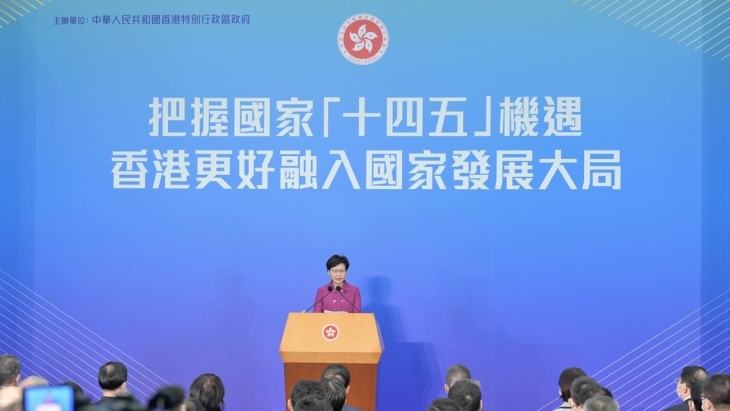 The plan provides support in enhancing Hong Kong’s status as an international financial hub, amongst others.

She noted this is the third time Hong Kong has been covered in the five-year plan since returning to China. It has previously been included under the 12th and 13th five-year plan.

“Other than the content of the Plan, the drafting process of the National 14th Five-Year Plan has left me much impressed.”

She noted that the plan, for one, pushed for the development of Hong Kong that is closely connected with China. The Central Government also showed support for Hong Kong.

She made the statement during the talk, themed “Actively Seizing the Opportunities of the National 14th Five-Year Plan, Hong Kong to Proactively Integrate into the Country's Overall Development.”

The talk was attended by over 200 guests including a delegation, led by Deputy Director Huang Liuquan of the Hong Kong and Macao Affairs Office of the State Council.

“Today, I am very confident in the HKSAR's implementation of the National 14th Five-Year Plan,” she said. "This is because, with the support of the Central Government, the overall situation of the HKSAR has witnessed fundamental positive development in the past year or so.”

The National 14th Five-Year Plan was approved at the fourth session of the 13th National People's Congress on 11 March 2021.

The plan also raised for the first time its support for Hong Kong in four emerging sectors, namely supporting to enhance the city’s status as an international aviation hub and develop into an international innovation and technology hub, a regional intellectual property trading centre, and a hub for arts and cultural exchanges between China and the rest of the world.