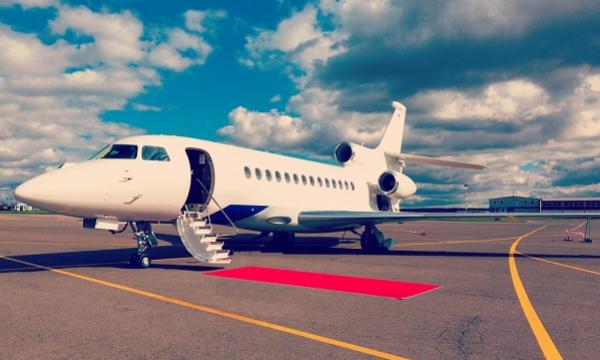 The most luxurious private jets in the world

Have you ever wondered how the wealthiest people fly around? Private charter jet is a surprisingly affordable way for anyone to travel but a luxury jet is another matter entirely. There are a select number of aircraft which are nothing short of miniature mansions flying in the sky, with cabins that are beyond imagination.

If you’ve never been on board one of these extreme jets, it’s almost impossible to appreciate just how opulent the interiors are. Here’s a quick run-through of a handful of the top extravagant luxury jets on the planet, and what you can enjoy while on board.

Boeing 787-8 BBJ
The Boeing 787-8 BBJ is one of the manufacturer’s business jets and offers an interior that can be totally customised to personal taste. In 2016, a Chinese client, HNA Group, opted to personalise this Dreamliner for a total cost of £200 million. For that price, every single fitting on board was crafted from scratch, creating a luxury jet which is nothing short of exquisite.

There’s enough space for approximately 40 people at 2400 feet but that doesn’t mean you’ll all be crammed in tight. The jet is large and spacious inside, and if you want a bit of privacy you could also head off to the master bedroom fitted with a walk-in closet and king-sized bed. And when it’s time to freshen up, there’s a choice of either the master bedroom shower or the double-sized shower in the ensuite which also has a heated marble floor.

Your friends won’t be bored while you’re taking a nap though, as the large communal space has armchairs made from the softest leather, sofas and a huge flat-screen TV.

With a private bedroom, magnificent dining room and full office on board, you can eat, sleep and work in unadulterated opulence. With soft leather in every direction, wide and comfortable seating and sophisticated design touches, it’s not hard to see why this jet commands such a high price tag.

Bombardier Global 7000
If you’re planning a long-distance trip, the Global 7000 is the one you need with its capacity to fly 8500 miles without stopping. That means a trip from New York all the way to Australia, a phenomenal distance all flown in absolute luxury too.

This jet costs £45 million and is one of the most recent models from Bombardier. Wealthy owners can customise the layout to meet their own needs, including setting up a full dining room or multimedia theatre on board.

Gulfstream G650ER
With a capacity that’s only marginally less than the Bombardier at 7500 miles, the Gulfstream G650ER is another of the ultra-long distance private jets. But those 14 hours you’ll be spending in the sky won’t be a chore with an interior which is both expensive and luxurious.

There’s no long-distance jet that’s larger or taller inside, as there’s capacity for 19 passengers plus 106.300 lbs of luggage to travel in sublime luxury. The interior is crafted from elegant stonework, top-class wooden panels and soft leather, providing a cabin that’s not just classy but incredibly comfortable too.

Dassault Falcon 900B
The cheapest luxury jet on this list, the Falcon 900B is one of the fastest private jets in the world with a top rate of 650 miles an hour. It has an impressive range too, with the capacity to travel 7700 miles - your journey will be over before you want it to be!

It’s not all about the fast engines though as the interior has a real wow factor too. So much so that it won the Red Dot Design award, recognising the beautiful aesthetics that have gone into every aspect.

Discover another world of private jet travel
Unlike a regular private jet, most people can only dream of taking to the skies in one of these beauties. However, with more opulent and extravagant jets being created all the time, it won’t be long before something that’s even more eye-wateringly expensive will be available!