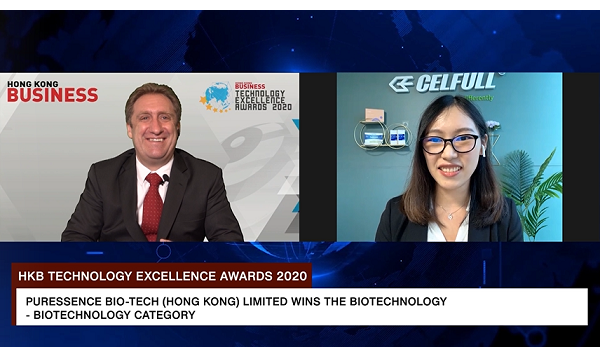 It was recognized for the preparation method and application of new-generation stable anti-aging composition, NADH.

Now in its second year, the awards event lauds enterprises that take the leap and take the lead in engineering trailblazing projects, virtual services, reconstructed strategies, and technological innovations.

Lasting for more than 20 years, the brand CELFULL was founded in California, USA, led by 6 medical doctors. It focuses on the research and development of new drugs and nutritional interventions about mitochondrial medicine and commits to improve life quality through exploring, developing, and producing “CELFULL” products that are beneficial to health.

Since the age of 40, the incidence of heart disease, cancer, stroke, Alzheimer's disease and other diseases has increased sharply with age. Ageing is the biggest risk factor for many diseases.

There are two key causes of aging namely, decreased NAD+ and accumulation of oxidative damage. However, Anti-ageing can effectively improve the quality of health, thereby reducing the incidence of diseases.

NADH is also claimed to be very safe, with the world's largest and most complete drug and drug target database Drugbank, listing it as a legal natural nutrition product.

Furthermore, NADH is so unstable that it is very sensitive to light, water, high temperature, oxidation, and even gastric acid in the absorption process, which makes NADH really hard to absorb, according to the FDA (Food and Drug Administration). To overcome this problem, the requirements for vegetation technology are extremely strict, which has always been a difficulty for scientists to overcome.

NADH is encapsulated in KGM microspheres, and the KGM film with strict anti-permeability formed by KGM on the surface isolates external air and moisture, which is advantageous to NADH’s long-term stable storage.

Furthermore, since KGM is not degraded by digestive enzymes in the stomach and small intestine but mainly digested and decomposed in the large intestine by seminase secreted by Aerobacter mannanolyticus, KGM encapsulation can protect NADH from gastric acid degradation and undergo two slow-release.

Each KGM-encapsulated NADH microsphere is a dispersed, independent and stable delivery system. It can be formulated with microspheres of other ingredients and is also suitable for the construction of multi-unit dosage forms, such as tablets, capsules, powders, and energy bars.

The innovation of NADH delivery system’s stability makes CELFULL NADH products superior to other brands as it ranked third on the top-sale list on an e-commerce platform. It also delivered high revenue of products and created sustainable economic development, according to Puressence Bio-Tech Limited.

The HKB Technology Excellence Awards, presented by Hong Kong Business, was held via video conferencing throughout the month of September.

If you would like to join the 2021 awards and be acclaimed for your company’s exceptional technological innovations, please email Julie Anne Nuñez at julie@charltonmediamail.com