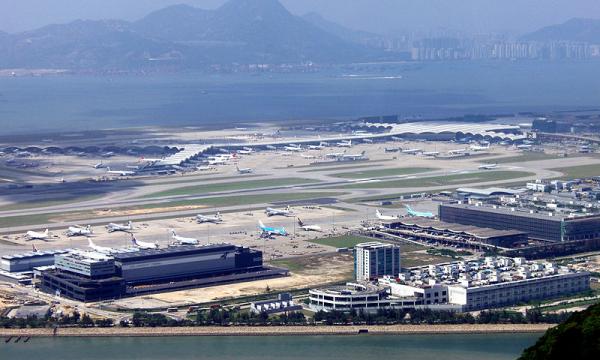 There were no flight movement for over 20 hours.

Passenger volume which has soared for seven straight months dipped 0.3% YoY to 5.6 million in September with overall traffic to and from Japan and Southeast Asia booking the largest decline.

Flight movements also fell 2.7% to 33,705 even as the HKIA implemented extensive rescheduling involving over 1,000 flight movements in one day after the storm moved away from the territory.

Cargo and airmail throughput also dropped 1.4% YoY to 431,000 tonnes on the back of a 4% decrease in exports. Traffic to and from Europe and Japan declined the most significantly.

However, the transshipments segment was able to post stronger headline figures and achieve a 3% YoY growth.

Photo from Ken'ichi at English Wikipedia - Transferred from en.wikipedia to Commons., Public Domain,