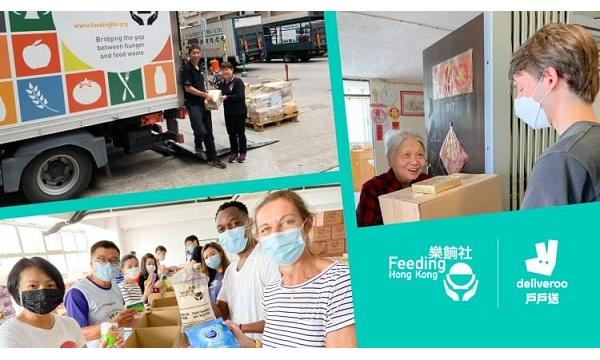 The campaign donated 60,000 meals to Hong Kong’s most vulnerable.

Deliveroo customers has raised over $300,000 for Feeding Hong Kong (Feeding HK) through the delivery app’s donation feature since the campaign’s kick-off earlier this June, according to an announcement

The funds raised have resulted in over 60,000 meals being delivered to Hong Kongers experiencing hunger.

To sustain the momentum, Deliveroo said they will match the first 10,000 tips made to Feeding HK through the in-app feature, between the weeks of 21 September to 18 October, for a maximum total of $50,000.

Over the past three months, over 50,000 donations have been made by Deliveroo customers to Feeding HK’s virtual food drive, “Food Matters,” through an exclusive in-app feature. Once customers reached the ‘checkout’ page, they were able to round up their bill or select a specific amount to donate to the NGO.

All funds donated will be used by Feeding Hong Kong to bulk-buy key staples, making every dollar go that much further and providing foods that are needed the most by charity partners across the city.

In addition to introducing the tipping feature, Deliveroo is said to contribute over 100 hours of volunteering by its employees to Feeding HK this year, and support their work by packing and redistributing surplus food to help frontline charities across the city.

Feeding HK is a local NGO that collects surplus stock from food companies, sorts and stores it, before redistributing it to multiple charities across the city. It is also Hong Kong’s sole accredited member of the Global FoodBanking Network (GFN), an international organisation dedicated to creating and strengthening food banks around the world.