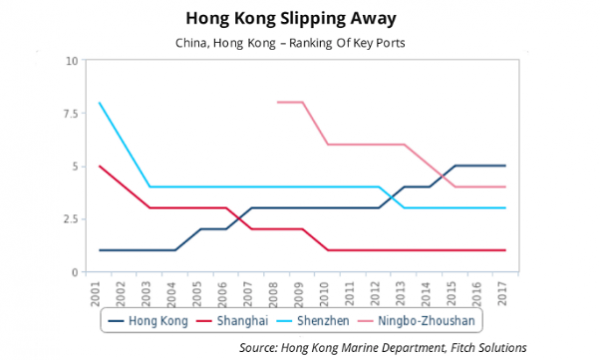 Ports in Shanghai and Shenzhen rank above the SAR.

The international competitiveness of Hong Kong's port services is increasingly put to risk as the spillover growth that the industry enjoyed from close ties with the Mainland since the early 2000's is now the main anchor pulling it down, according to Fitch Solutions.

"Hong Kong’s strong port position has been eroded over the past decade whilst tourism suffers from increased negative sentiment towards mainland Chinese," Fitch Solutions said in a report.

The SAR's ports already lost its position as the world’s busiest container port in 2005 and continued to slip the rankings, coming in at fifth in 2017 as Mainland ports became more technologically advanced and offered lower terminal handling costs. In fact, ports in Shanghai, Shenzhen and Ningbo-Zhoushan ranked above the SAR, coming in at first, third and fourth respectively in the same year.

“We expect this to continue to erode Hong Kong’s position as a key re-export centre to the mainland as Chinese importers directly tap overseas markets,” Fitch Solutions added.