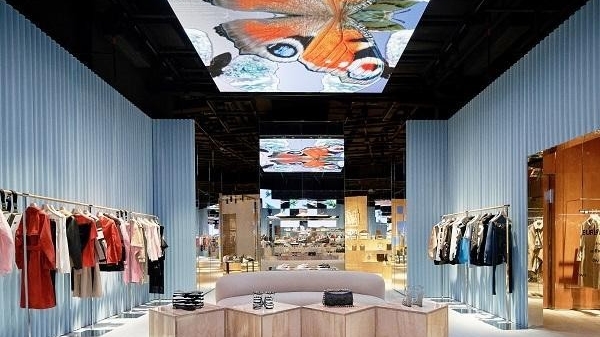 Chow Tai Fook Jewelry Group from China/HK SAR was amongst the top 10 companies.

The share of China and Hong Kong in the top 100 luxury goods sales increased by 1.8 percentage points to 8.9% in the financial year 2020, according to Deloitte’s Global Powers of Luxury Goods 2021 report.

“Seven of the nine Chinese companies experienced double-digit percentage falls, due not only to the COVID-19 pandemic, but also to a surge in the international gold price that dampened the retail demand for gold products, and weak performance in Hong Kong SAR as a result of social unrest and a contraction in the local economy affecting tourism and local sales,” it said, but noted that the seven largest companies remained profitable.

The composite net profit margin for the China-based companies was at 4.2%, 1.7 percentage points lower than last year.

According to Deloitte, the top 100 companies have an aggregate luxury goods sales of $1.96t (US$252b) in 2020, lower than the about $2.2t (US$281b) in the previous year following the, reflecting the impact of the pandemic which lead to the closure of stores, shifts in consumer demand, and supply chain disruption, amongst other factors.

The nine markets were included in the geographical analysis given the “high concentration” of luxury goods companies headquartered in Europe, the US, and the largest markets in Asia, Deloitte said. Whilst sales for many companies come from outside their country of origin, it said that all of the companies’ sales will be attributed to the company’s domicile country.

Luxury goods in the report referred to goods for personal use such as designer clothing and footwear, bags and accessories including eyewear, jewellery and watches, and prestige cosmetics and fragrances. The top 100 were included according to their consolidated sales of luxury goods in 2020.

The clothing and footwear sector accounted for the largest percentage of sales in the Top 100 at 33.6%, followed by jewellery and watches at 28.4%, cosmetics and fragrances at 17.4%, multiple luxury goods at 15.7%, and bags and accessories at 4.8%.

Chow Tai Fook Jewelry Group Limited from China/Hong Kong SARfell to Top 10, dropping two places from the 2019 list as its luxury goods net sales declined by 14.7%, reaching about $56b (US$7.2b).

“The group had a stable performance in the first half of FY2020, supported by steady growth in mainland China, but sales fell in the second half, due to a surge in the international gold price that dampened the retail demand for gold products, a weak performance in Hong Kong SAR, and the impact of the COVID-19 pandemic in [the fourth quarter] (Chow Tai Fook’s financial year-end was end-March 2020),” Deloitte said.

Deloitte added that the company shut about one in five of its Hong Kong stores, the majority of which are in the prime tourist areas because of the ongoing demonstrations and protests, and the declining number of visitors from Mainland China.

Meanwhile, its gold products slipped 16.3% mainly due to gold price volatility and gem-set jewellery declined 17.5% “in the challenging macroeconomic environment.”

Deloitte also noted that the group continued expanding its owned and franchised retail network, opening over 700 new points of sale in Mainland China, bringing its total number of stores by end-2020 to 3,850 and another 1,139 shop-in-shop/store corners. It also saw its e-commerce retail sales grow by 3.4%.

The group completed its acquisition of Enzo Jewelry in January 2020. Enzo Jewelry has 59 points of sale in Mainland China and is also present across e-commerce platforms there including Tmall, JD.com, and VIP.com.

Italy’s Essilor Luxottica placed sixth with about $68.5b (US$8.8b) sales, whilst US’ PVH Corp. climbed a place to rank eighth with around $65.3b (US$8.4b), and France’s Hermès International SCA rose two places to ninth place with about $56.7 (US$7.3b) sales, according to Deloitte.

Deloitte said luxury goods companies are also undergoing changes in their operations and are putting more emphasis on adopting digitalisation and sustainability goals in the industry, which “are driving fashion-tech investments.”

“Increasingly, luxury goods companies are changing their approach and mindset, incorporating sustainability and digitalisation into their long-term strategies, to align with consumers’ demands and new regulatory requirements,” it said.

“They are focusing more on sustainability in the design and production of luxury goods, and at the same time are accelerating the adoption of digital solutions to engage with consumers and deliver luxury shopping experiences using technology,” it added.

Deloitte said luxury goods companies are setting environmental targets for the future, prioritising the offsetting of carbon emissions, noting that ways to go about this are by being more sustainable in design, production, distribution, and communication. They are also looking at using technology to develop environmentally-new products.

“Luxury companies are exploring the use of biomaterials, not only for apparel or shoes, but also for cosmetics and beauty products. The use of biotech could give a boost to sustainable production methods, reducing the negative impacts of sourcing raw materials (intensive farming, extraction, and fishing),” it said.

The companies collaborate mostly with startups that are specialising in biotech, it said.

Deloitte noted that biomaterials, natural material, or synthetic material created through interaction with biological systems, are already being used in other industries for different uses. It noted that technology is used to create new material with minimal environmental impact but has great material output and design.

It also added that the growing market for pre-owned “vintage” watches is one way for the companies to engage with new customer segments and foster circularity or reuse. It will also provide consumers with a sustainable and accessible way of buying luxury watches.

Luxury goods companies are also delving into the market for non-fungible tokens (NFTs) which represent a digital item or asset through blockchain technology, Deloitte said, noting that it presents several opportunities for luxury companies.

NFT serves as a tool to verify the authenticity of an item as blockchain helps trace the origin of an item including its history and previous owners, allowing a product to be easily transferred, traced, and resold. It can also be used to sell digital collectibles such as limited edition or “one-of-a-kind” pieces of art, it said.

The tokens were also being used to create digital skins for avatars in video games, a popular activity for Gen Zs. Deloitte said that an important aspect of “virtual luxury” is its viability and accessibility.”

“Entering the gaming world is a way for luxury houses to speak to the younger generations, who will be their most important customers in the coming decades and creating appeal by modernising their brands,” it said. “Collaborations between luxury goods firms and gaming companies offer the opportunity to create parallel streams of revenues thanks to capsule collections that can be found first in a game and are then sold in real life.”

Luxury industry players are now gearing up for their next steps by studying Gen Alpha or those born since 2010, as Gen Z has already entered the market and brands are already accustomed to dealing with them and the Millennials.

Deloitte said the generation is composed mostly of children of Millennials and are raised according to their parents’ values, noting that they are living in a “digitalised economy and a globalised world.”

“Gen Alphas are expected to become a generation of consumers with large spending power and the key to future success for luxury goods brands may lie in gaining their loyalty from an early age,” Deloitte said.

“As the consumers of the future who were born in a digital age, Gen Alpha will be exposed to luxury brands from a very young age through social media, through their peers, and through the habits of their millennial parents,” it added.

Deloitte said that 2021 was a disruptive year that has “driven luxury e-commerce past the tipping point” for it to become a vital part of the omnichannel distribution strategy of global players.

The key factors that have driven e-commerce strategies in the sector include the growing consumer demand for luxury e-commerce due to the pandemic and the increasing importance of younger consumers such as Millennials and Gen Z for luxury goods sales.

It also cited China’s rapidly growing share of global luxury sales and other new geographic opportunities and the partnerships with major luxury e-commerce players and social media providers such as WeChat mini-programs which could help deliver “high quality, flexible, reliable, brand-centric e-commerce business models,” were also among the key factors.

Farfetch and YOOX NET-A-PORTER Group were the leading e-commerce players in Western markets, whilst Alibaba’s Tmall Luxury Pavilion is the leading player in China and other Asian markets.