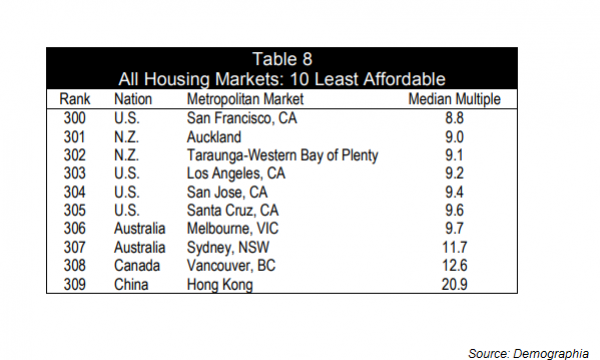 Hong Kong continues to hold the unenviable distinction as the world’s most expensive property market in 2018 for the ninth year running, according to the 15th annual Demographia International Housing Affordability Survey.

The survey uses the median multiple, which is median house price divided by median pre-tax gross household income, to evaluate the affordability of housing markets. Hong Kong’s median multiple rose from 19.4 in 2017 to 20.9 in 2018.

The survey ranks countries with a median multiple of 5.1 or above as ‘severely unaffordable,’ a recognition that Hong Kong shares with Auckland (9.0) and Australia (6.9).

Vancouver trails behind Hong Kong as the second least affordable housing market with a median multiple of 12.6 and pushing Sydney to third place. Melbourne and Santa Cruz California rounds out the top five.

On the other hand, Canada’s Cape Breton is ranked as the world’s most affordable major housing market with a median multiple of 2.1 followed by Fort McMurray. US also features prominently in the list with Rockford, Utica-Rome, Davenport, Peoria, Syracuse, Erie and Lansing all making it to the top ten most affordable housing markets in the world.

Are Hongkongers moving to the Greater Bay Area?