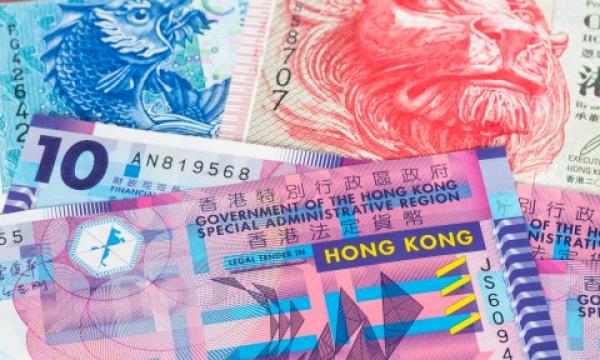 Approximately $3.2t in Chinese debt is poised to mature by 2023, spelling trouble for Hong Kong.

When Hong Kong Telecommunications unveiled its $500m USD bond offering in the last week of September, it single-handedly proved that investors are still keen on high-grade Hong Kong bonds despite increased economic volatility and relentless pro-democracy protests. The 10-year bond issuance was oversubscribed and its order book reportedly exceeded $1.85b, showing that strong corporate names can still thrive when it comes to securing debt financing.

Despite the steady stream of corporate bond issuance, companies may face tougher financing conditions as more investors favour long-term bonds over short-term bonds, spooked by continuing unrest and the escalating US-China trade war. “Uncertainties in the global and local markets might have dampened market sentiment in the DCM market, as we see that the yields of short-term bond currently exceed that of long-term bond which suggests that investors are concerned about the economic downturn,” Eric Lau, partner for deal advisory, corporate finance at KPMG China told Hong Kong Business.

“Following the reduction of interest rate by the Fed, we are seeing a falling trend in yields for longer-tenor bonds. We think other banks may follow the rate cuts, whilst other downside factors also create pressure on yields. Overall, we expect the low rate environment will continue in the fourth quarter of 2019, and the bond yields will stay at a low level,” he added.

Green bonds on the rise
Another trend shaping Hong Kong’s debt capital markets is the rise of green bonds. These bonds are designed to fund projects that have positive environmental benefits. In May, the government raised the US$1b in inaugural green bonds under the $100b Government Green Bond Programme. With a coupon of 2.5%, the bond attracted over US$4b in orders from global investors as sovereign wealth funds, supranationals and central banks accounted for the biggest share at 41%. The proceeds of the oversubscribed green bond will be used to finance or refinance public works projects in clean transportation, air quality improvement and green buildings.

“As a rapidly growing green finance market, Hong Kong will play a key role in the development of the Greater Bay Area as a leading centre for green finance in Asia, with great potential to grow the city’s bond and project finance markets,” Dr. Ma Jun, chairman and president of the Hong Kong Green Finance Association said in a statement.

In 2018, the issuance of green bonds in Hong Kong hit about US$11b, data from OCBC Treasury Research show. However, this still trails behind green bond issuance in Mainland China which rose 33% YoY to US$31.2b in 2018.

In order to accelerate the development of green bonds, the government provides subsidies via the Green Bond Grant Scheme and Pilot Grant Scheme.

“We are expecting the green bond market to keep booming in 2019/ 2020. Institutional investors have a rising awareness of the importance of sustainability and many global asset managers are incorporating ESG considerations into their investment decisions,” noted Angela Chiu, associate director for deal advisory, corporate finance, KPMG China.

“For instance, some Chinese banks have specific KPIs on Green Bond deals. These market fundamentals, combined with the supportive initiatives introduced by the Hong Kong government, will continue to drive the development of the green bond market in 2019 - 20,” she highlighted.

Corporates have also jumped aboard the green bond bandwagon. Swire Properties launched its first green bond in 2018, raising US$500m at a coupon rate of 3.5 %, due 2028. The 10-year green bond was issued under its US$4b Medium Term Note Programme and part of the proceeds will be used to finance its newest Grade-A office development, One Taikoo Place.

In July, the government issued its fourth Silver Bond, which received applications amounting to over $7.9b. The final issue amount is $3b, with a tenor of three years. Bond holders will be paid interest once every six months at a rate linked to inflation in Hong Kong, subject to a minimum rate of 3%. In Q1 2019, the government also issued a 10-year bond worth $1.5b and a 15-year bond worth $600m under the Institutional Bond Issuance Programme.
A Chinese government-backed bank had also issued its first listed bond on the Hong Kong Exchanges and Clearing Limited (HKEX).

“This provides a new type of investment opportunity for retail investors whilst allowing Agricultural Development Bank of China to diversify its financing base and increase its market visibility,” HKEX CEO Charles Li said in a statement. “This is the latest step in HKEX’s continuing development of its fixed-income markets. This is the first to be open for subscription to both retail investors via HKEX, and to professional investors in the Over-the-Counter (OTC) market, following Hong Kong Monetary Authority’s Exchange Fund Bills.”

Whilst Hong Kong remains the largest offshore centre for bond placement by Chinese firms, a vast majority of Chinese issuers opt for USD-denominated bonds instead of traditional dim sum bonds. Data from Natixis showthat over 80% of Chinese offshore bonds issued in Hong Kong are in USD, whilst less than 10% are in RMB and other currencies.

“The Hong Kong bond market is dominated by issuance in the USD with a shrinking and tiny part in the RMB (Dim Sum bonds). The amount of the offshore bonds issued by Chinese firms looks small when comparing with the onshore market but it is indeed mighty as the funding is liquid and convertible in foreign currencies,” Alicia Garcia Herrero, chief economist for Asia Pacific at Natixis, said in a note.

“Compared to the onshore bond market, Hong Kong also has a very high proportion of international investors. Even if China’s onshore market is obviously much bigger, the relatively small share of foreign participants makes Hong Kong a larger source of foreign investment for Chinese issuers than their onshore share today,” she added.

Hong Kong is by far the largest offshore centre for bond placement by Chinese firms, contributing 66% of offshore bond issuance. As China’s preferred offshore financial centre, Hong Kong offers the channel to finance in longer term maturity compared to the onshore market. Over half of onshore bond issuance is less than one year maturity, but the proportion is only 25% for Chinese firms financing in Hong Kong.

From a sectoral perspective, financials and real estate are the most reliant on Hong Kong for bond issuance, which form 8% and 13% of their total issuance respectively, data from Natixis show. For instance, in the first 10 days of July, Chinese property developers issued overseas bonds worth over US$4b, taking advantage of low US Treasury yields. A stark example is Tahoe Group’s issuance of three-year bonds worth US$400m three-year bonds with a coupon rate of 15% in July, the highest-yielding debt amongst Chinese developers, compared with an average yield of 8.34% amongst developers tapping the offshore bond in the first six months of the year.

Chiu cautioned that the surge in bonds issued by Chinese property developers will not last long. “We share the view that Chinese property developers is likely to slow in the second half of the year in response to not only the weakening property sales, but also more restricted NDRC control as well as less refinancing needs. Adding to that, drop in investment and M&A volumes also create less bond financing needs,” she said.

Offshore bond issuance by Chinese property developers crashed US$1.6b in August from US$7.4b in July, data from Moody’s show. This is expected to decline due to lower refinancing needs, depleted quotas and new restrictions on offshore issuance.

Chiu expects that some of the regulations designed to cool the property market, including the move by the National Development and Reform Commission to tighten approval procedure for quota applications from real estate developers, may be relaxed in an effort to lend support to the economy.

“Investors will tend to focus on quality investment grade bonds. The slower economic growth in China, the challenging retail environment in Hong Kong and prolonged trade talks are creating pressure on issuers’ earnings, which might eventually trigger downgrade in ratings and impact the issuance costs,” added Lau.

Default risks surge
Amidst surging issuances, a growing number of Chinese firms are at risk of default as liquidity conditions tighten. Data from S&P show that a sizeable volume of approximately $3.2t is poised to mature in the domestic Chinese debt market by 2023. The majority of the $6.2t in corporate debt maturing by 2023 is financial debt at $3.7t. Another $3t in government debt (both national and local) is also set to mature by 2023.

“Of the Chinese domestic nonfinancial corporate debt maturing by 2023, industrials hold roughly half, at $1t, followed by real estate at $282b. Following utilities with $197b, materials and energy tie for fourth place at $186b. Lower demand for real estate and lower profitability will likely increase the perception of risk for these firms and subsequently push refinancing costs to potentially unsustainable levels to compensate investors for the risk they are taking on. Some issuers in this sector may face increasing default risk as well,” S&P noted in a report.

In the Mainland, onshore gross bond issuance decelerated to 9% YoY in Q2 2019 from 50% YoY in Q1 2019, data from Natixis show. However, net issuance remained high, indicating firms managed to raise capital in the bond market instead of simply rolling over old debts. The public sector accounted for the largest part of gross issuance whilst small improvement was seen in private firms, showing government policies are partially effective. Financials had a slower pace of issuance, which could be a result of higher counterparty risk from the restructuring of troubled regional lender, Baoshang Bank.

“Defaults for both state-owned and private firms will increase due to the government goal in clearing zombie corporates by 2020, which is similar to the supply-side reform after 2015,” Garcia Herrero said in another note.

“Over these five years, we expect that debt costs will likely rise, though monetary policy has recently eased funding costs, and government reforms and investment in the infrastructure of the domestic capital markets will likely help business sustainability, promoting debt issuance in the process,” S&P noted.

Path forward
“Looking into 2020, we are expecting long term bond yields will remain at low level. Some issuers might take the opportunities to refinance some of their bank debts with longer-term bonds to reduce overall financing cost. There might be more refinancing needs at the beginning of next year when investor appetite returns which may boost the DCM trade volume,” Lau noted.

Lau warned that the tightened financial conditions and market volatility will continue to influence investors’ attitude. “Investors will tend to focus on quality investment grade bonds. The slower economic growth in China, increasingly challenging retail environment in Hong Kong and prolonged trade talks are creating pressure on issuers’ earnings, which might eventually trigger downgrade in ratings and impact the issuance costs,” he said. On the flip side, some Hong Kong investors may choose to shift their investments in equities in light of global uncertainties which may create some demand for DCM instruments, he added.

“Given the political uncertainties, dependence on the US for dollar funding might be considered more risky than in the past, offering an edge for Hong Kong bond issuance instead,” Garcia Herrero said. “Hong Kong plays a vital role in offshore bond financing for mainland China, i.e. the best way to fund in hard currency funding and to reach diversified investors. In addition, Hong Kong has been the key actor in the RMB internationalisation as well as attracting foreign investment through the setup of Bond and Stock Connects.”