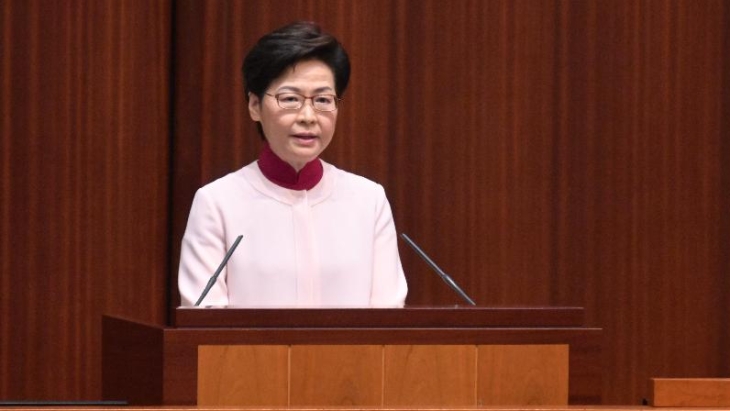 Amongst the projects she laid out was the development of a 'smart port'.

In her policy address, Lam said the local government will step up its efforts to make Hong Kong’s role as a “bridge for international investors to access the Mainland market and for Mainland funds to reach out to the international market,” more significant.

Lam said the local government is planning to support the Hong Kong Exchanges and Clearing Limited (HKEX) by establishing a listing regime for special purpose acquisition companies; and by promoting cooperation with Guangzhou Futures Exchange on “financial product development related to the areas of carbon emission trading.”

The local government is also working on expanding “channels for the two‑way flow of cross-boundary RMB funds and develop offshore RMB products and tools,” promote cross‑border financial technologies, and provide tax concessions to “further attract family offices to establish a presence in HK.”

In a bid to boost HK’s status as an international transportation centre, Lam said the government is working on developing a “smart port," which will introduce the use of digital technology in business processes and operations in the city’s maritime and port industry.

Tax concession for members of the maritime will also be introduced, according to Lam.

The Hong Kong Shipping Registry of the Marine Department’s will oversee service network will also be expanded with new desks being set up in San Francisco, Tokyo, and Toronto.

For cross‑boundary land transport, Lam said HK and Shenzhen have formed a task force to jointly develop the “GBA (Greater Bay Area) on the Rail” that will help broaden options for corporates on both sides of the border seeking to formulate future office strategies, according to CBRE.

A scheme allowing the travel of private cards from and to Hong Kong and Guangdong via the Hong Kong–Zhuhai–Macau Bridge “without the need to obtain a regular quota in advance,” is also being worked on by the two governments.

The scheme called “Quota‑free Scheme for Hong Kong Private Cars Travelling to Guangdong via the HZMB” will be extended to other land boundary control points.

The local government also committed a $1b subsidy to assist the pandemic-hit convention and exhibition (C&E) industry which Lam regards as “crucial” to HK’s international trade. This has been extended until the end of 2022.

“In the long run, the government will continue to expand C&E facilities, including redeveloping the sites of the three government towers in Wan Chai North and the Kong Wan Fire Station into C&E facilities, hotel and Grade A offices, as well as expanding the AsiaWorld‑Expo, in order to consolidate and enhance Hong Kong’s status as an international C&E hub,” Lam revealed.

The government has also developed a financial infrastructure called “Commercial Data Interchange,” which will connect small and medium enterprises to banks.

Lam added that the platform facilitates "secure data sharing based on the consent of enterprises” and allows “local banking system to serve the real economy more efficiently.”

Operation of the Commercial Data Interchange is expected to start in 2022.