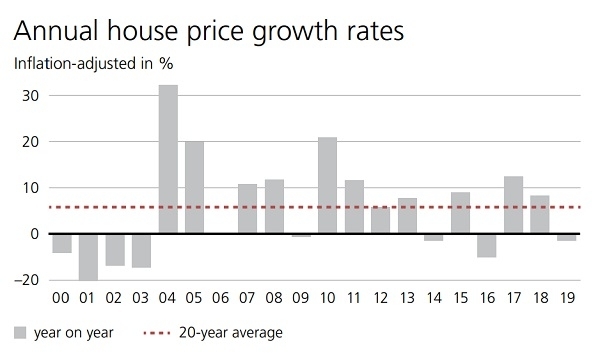 It remains the least affordable housing market amongst cities analysed.

Hong Kong grapples with the third-highest risk of a housing bubble in the world, scoring 1.84 to tie with Amsterdam, according to the latest UBS Global Real Estate Bubble Index.

The city fell down two notches from its first place ranking in the previous year as housing bubble risk shifted towards the Eurozone. The greatest risk of a real estate bubble is currently on Munich, Germany, where real prices have more than doubled over the last 10 years, whilst real rents have risen by 40%. Toronto, Canada followed as real housing prices in the city almost tripled between 2000 and 2017.

Amsterdam tied with Hong Kong for the third spot, recording the strongest price increase of all cities in the study since 2015, noted UBS. Another German city, Frankfurt, closed the top five, with real prices soaring 11% in 2018--the highest rate amongst the cities studied by the UBS.

“In Hong Kong, momentum has abated and prices have fallen slightly since mid-2018. Nevertheless, although the city is still in bubble-risk territory, given that prices have doubled over the last 10 years, [and] there is no fundamental trend reversal in sight,” the report read.

Despite the decline in bubble risk, Hong Kong remains the least affordable housing market of the cities analysed in the study as “even skilled service-sector workers cannot afford to purchase a medium-sized flat,” said UBS.

“The weaker economic outlook has cooled residential buyer sentiment. Primary residential transactions dropped by about 40% over the summer months,” the report added. “A greater government focus on public housing will likely limit the number of new private flats coming to market in the years ahead. It should also, along with strong underlying housing demand, cap downside risk for the time being.”

UBS expects home prices to fall over the next few quarters and prices are expected to remain volatile, especially if political and trade tensions persist.

“Although growth rates recovered in the first half of the year, real prices are 2% below last year’s all-time high value. Household incomes and rents have declined slightly in the past four quarters.”

The term “bubble” refers to a substantial and sustained mispricing of an asset, the existence of which cannot be proven unless it bursts, said UBS.