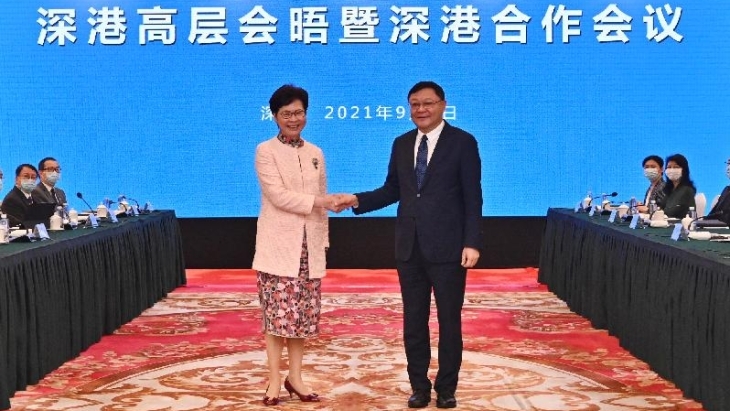 The two governments reviewed the achievements made since the last meeting and set out the goals for cooperation in the coming year. They also witnessed the signing of several co-operation agreements between the two places, such as the beginning of the implementation of the National 14th Five-Year Plan.

"Hong Kong will make the best use of the advantages of 'one country, two systems' capitalise on our business environment that is highly market-oriented, internationalised, and underpinned by the rule of law, and proactively serve as dual engines alongside Shenzhen to drive development in the Greater Bay Area under the spirit of complementarity and mutual benefits," Lam says.

With the support of the Central Government, Hong Kong and Shenzhen will continue to widen mutual access between the financial markets to contribute towards high-quality Guangdong-Hong Kong-Macao Greater Bay Area (GBA) development and deepen financial market reforms of the country. They agreed to continuously explore a host of financial facilitation measures, including the scope of Shenzhen-Hong Kong Stock Connect. The establishment of after-sales service centres by the Hong Kong insurance industry in the Mainland cities of the GBA—facilitating the application of cross-boundary fintech and strengthening cooperation on green and sustainable finance—will also be focused on.

It was also agreed to increase the Qianhai Shenzhen-Hong Kong Modern Service Industry Co-operation Zone from 14.92 km2 to 120.56 km2. The Hong Kong government will discuss with relevant central ministries to achieve further liberalization of trade in services of the Qianhai Plan through the Mainland and Hong Kong Closer Economic Partnership Arrangement. The Qianhai Authority, Shenzhen Administration for Market Regulation, and the local taxation authority of Qianhai jointly launched the Qianhai e-Services Hong Kong-Macao Station. A service platform in Hong Kong, it will provide an integrated online service for business registration and tax-related matters for free to the people of Hong Kong and Macao. The platform will further benefit the development of Hong Kong people and enterprises in Qianhai.

"The 19 working groups will press ahead with their work pragmatically with unsparing efforts. Progress made will be reported to the Hong Kong/Shenzhen Co-operation Meeting regularly," Lam concluded.