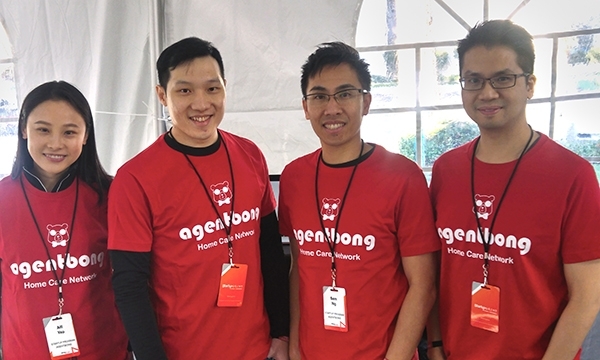 Agentbong provides a platform to create a home care network for the community. Sam Ng, co-founder and CEO, says Agentbong provides three main categories of services – housekeeping, child care and elderly care to cater to different needs of a family.

"Firstly, our proprietary system simplifies and automates service coordination," says Ng on what makes Agentbong unique. "Secondly, we have our own procedures to professionally train and verify all of our registered service providers, that is, helpers and caregivers."

Ng and Agentbong co-founder and CTO Raymond Lee both have a very strong technology background, as well as a vast network within the social sector in Hong Kong. They realised that despite the exponential advancement in technology, there are still a lot of remaining problems in the society especially societal issues, including employment and ageing population.

Having decided to quit his job in 2014, Ng went on to start various ventures with Lee. After rounds of failures and pitches, one of their companies, Agentbong, successfully entered into one of the well known incubation programmes in Hong Kong, ran by Hong Kong Science and Technology Park. Agentbong quickly expanded the operations to Singapore six months after, supported by their Singaporean partner, Aili.

In creating Agentbong, the team basically kills two birds with one stone, says Ng: helping the unemployed, especially women, to find a source of income, and contribute to the healthcare sector in terms of elderly care.

"For the unemployed, Agentbong provides training to equip them with the necessary skills in confinement nannying, elderly care, and housekeeping," he says. "And today's healthcare system sees a bed crunch and a lack of healthcare professionals. Agentbong contributes to the continuity of care and enrich community care whilst helping to alleviate these issues for the healthcare system."

Ng shares how they have a client who is a doctor, and whose mother is 70 and in a very good condition. "He couldn’t find anyone to look after her mother in his stead," shares Ng. "What he needed from the caregiver is to accompany her to her dance class or high tea in a hotel, whilst all the other agencies could only provide nurses for procedures."

He says that after the doctor found out about Agentbong, he called them and they guided him to download the app. He realised that Agentbong has a wide range of caregivers with different skill sets. "Eventually he was assigned a caregiver who can cook very well," says Ng. "So now, she does not only have a companion but also a good home cook as well."

Ng reveals they are preparing for the next round of funding to speed up business development in both Hong Kong and Singapore.

"At the same time, we are exploring to expand into other APAC regions, such as Japan, which are suffering from an ageing population," he says.