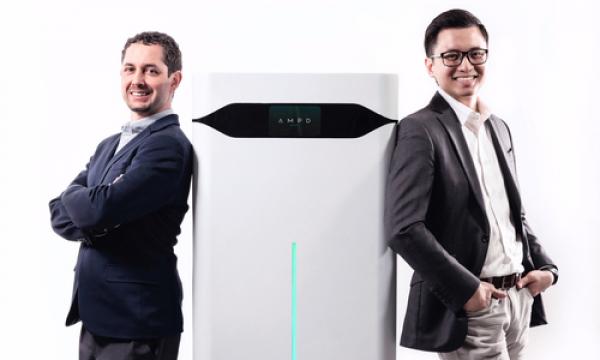 Its Ampd Silo is innovative, safe, and highly reliable.

Ampd Energy is an award-winning energy storage company that ensures businesses and brands, as the founders say, see the light and stay switched on.

The company’s Ampd Silo is on the cutting edge of energy storage. It uses 1,792 Li-ion batteries to store on-grid energy and can deliver backup power instantaneously. Several patents have been filed relating to the technology and materials used in the Silo.

According to Brandon Ng, CEO, Ampd Energy, two years of research and development went into creating Ampd Silo. “Its unique features lead the field and comprise one of the world’s most advanced and dependable energy storage solutions across home, commercial, and industrial applications,” he says.

Ng shares that the light-bulb moment for Ampd Energy was a blackout, during which he and Valente realised their motorcycle EV batteries could be scaled to power buildings. “From darkness came light, and compact, uninterrupted backup power supply for businesses and brands all over Asia, and beyond,” remarks Ng.

He notes that three billion people and millions of companies do not have access to reliable electricity. According to Ng, there are massive social, economic, and safety issues relating to power cuts, from machinery and offices being shut down to patients at risk in hospitals. He says currently the best solution available are diesel generators, which are huge polluters, can only run outdoors, are very loud, and require frequent maintenance.

The Ampd Silo is eco-friendly and has a zero transfer time, allowing users to back up mission-critical devices found in airports, emergency room wards, and data centres.

The business was started through a process of trial and error, as the founders painstakingly developed an on-grid energy storage system. Brandon and Luca had already worked on smaller batteries that would power their electric motorcycle; however, scaling up the battery and assuring it could be used in the most demanding mission-critical situations, with 100% reliability, required over two years of research & development and numerous patents.

Ng recalls that once the first iteration of the product had been developed, they reached out to their networks to find suitable Series Seed investors who would be interested in their technology. Numerous private individuals were eventually won over by the company vision and the first prototype, leading to US$3.7m in Series Seed funding. Series A funding is expected to be completed in Q3-Q4 of 2017.

Ampd Energy has been sourcing the best distributors in its focus markets and already has assigned distributors in Indonesia, Hong Kong, and Macau. The next steps are to run customer trials in these three initial markets.