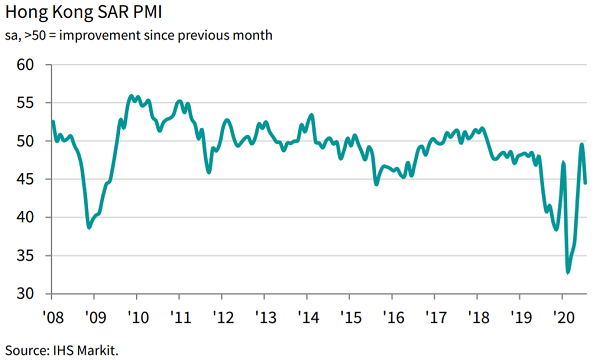 The purchasing managers’ index (PMI) in Hong Kong fell from 49.6 in June to 44.5 in July, showing that health in the private sector deteriorated, according to IHS Markit.

However, the report noted that the latest reading was not as severe as seen during the worst of the pandemic from February to April, but signalled a setback to the current recovery of private sector conditions.

The tightening of COVID-19 restrictions during July, in response to a rising number of new infections, dealt a further hit to business conditions across Hong Kong's private sector. Business activity shrank sharply, accompanied by a similarly steep contraction in new orders. Some respondents noted that the retail sector was especially hard hit as consumers were reluctant to spend.

Consequently, business confidence was dented further, with the proportion of firms anticipating a decline in business activity over the next 12 months increasing noticeably from June.

With sales weakening at a faster pace during July, firms in turn reduced their input purchases as part of their efforts to control costs and avoid keeping excessive stocks. Purchasing activity was cut severely, dropping at a pace comparable to those during the height of the lockdown measures earlier in the year. Input inventories consequently contracted at a substantial rate.

The level of backlogs fell further in July with a quicker rate, reflecting rising spare capacity. That said, employment remained broadly unchanged, as was the case in June.

Finally, overall input prices dropped at the start of Q3 after a marginal climb in June. Deflation was driven by a renewed and sharp fall in purchase costs and a further decline in wages. As part of their efforts to boost sales, firms offered discounts. Output charges fell for a thirteenth straight month, and at a marked pace that was the fastest since April.

“Whilst employment remained broadly unchanged, the concern is that further severe deteriorations in business conditions will see a new round of job losses," Bernard Aw, principal economist at IHS Markit, added.