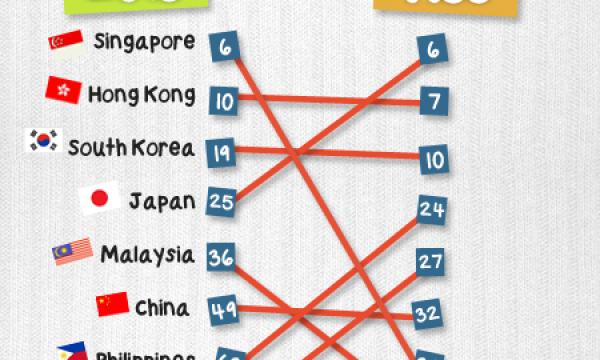 Hong Kong's ranking in 1988 was 29 notches higher than Singapore.

The Economist Intelligence Unit (EIU), a sister company of The Economist, has published its recent quality-life-index which attempts to measure what countries will provide the best opportunities for a healthy, safe and prosperous life in the years ahead. 80 countries were rated.

Its quality-of-life index links the results of subjective life-satisfaction surveys—how happy people say they are—to objective determinants of the quality of life across countries. Being rich helps more than anything else, but it is not all that counts; things like crime, trust in public institutions and the health of family life matter too. In all, the index takes 11 statistically significant indicators into account. They are a mixed bunch: some are fixed factors, such as geography; others change only very slowly over time (demography, many social and cultural characteristics); and some factors depend on policies and the state of the world economy.

The counterpart of the 2013 quality-of-life index in 1988 was the where-to-be-born index which showed that Singapore was not the most ideal Asian country ithat time.

Back then, Singapore was just ranked 36th while Hong Kong landed at 7th. Other countries which were ahead of Singapore 25 years ago were China, India, Philippines, South Korea and Japan.

Japan, ranked 6th, was the most ideal country in 1988 but its ranking fell this year at 25th.

New found utopian societies in Asia – or countries in the region which were not on the list in 1988 but now appeared in 2013 – are Taiwan, Thailand, Vietnam and Bangladesh.