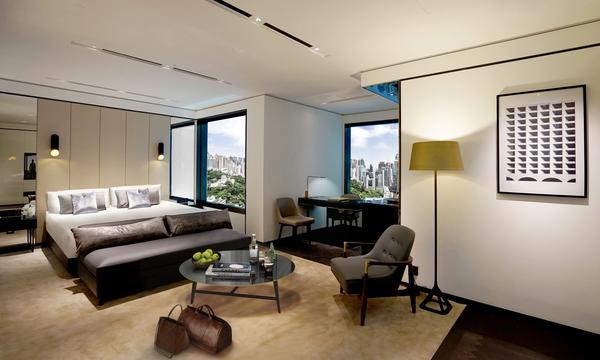 The Murray is a contemporary urban chic hotel, but it is not just any other hotel.

Duncan Palmer, managing director of The Murray, Hong Kong, shares that the hotel was formerly the Murray Building, designed by modernist architect Ronald Phillips in the sixties. “The Murray, Hong Kong will be the flagship of Niccolo Hotels,” he says. “ It is one of only eight buildings identified by the Hong Kong government as part of the Conserving Central Project. It will not be just any other hotel; it is the preservation of one of city’s most iconic landmarks.” The high-profile preservation project is by British International studio for architecture, urbanism and design Foster + Partners.

The Wharf Group acquired the government site and building for HK$4.4 billion while the total cost of transforming it into a hotel including the site cost will be a total investment of approximately HK$7.8 billion.

It will feature 336 oversize rooms and suites spanning 25 floors, five dining options including a rooftop restaurant and bar with stunning views of the city’s skyline and The Peak.

The hotel is located along Cotton Tree Drive in Central, Hong Kong and is within close proximity to the financial district as well as the green oases of Hong Kong Park and the Botanical Gardens.

Palmer shares that Ronald Phillips, the architect behind The Murray’s original modernist architecture, included recessed windows which allow substantial light to the interiors while the concrete blade walls block the sun’s rays from hitting the glass panes directly. This advance design won an award for energy conservation 20 years after the building was completed. Foster + Partners has respectfully preserved this feature keeping the building revolutionary then, and revolutionary now.

“Some other physical features that will make The Murray unique will be its secluded and privately owned driveway, and a lobby that will have a sophisticated bar at one end. There will be no applied surfaces such as paint,” says Palmer.

The interior design by Foster + Partners uses stone, fabric, leather, metal and glass. Further, the building is serviced by eight lifts and a host of purpose-built meeting spaces including the 450-sqm Niccolo Room with a LED ceiling and walls. This is complemented by another six meeting rooms with natural daylight and views of St. John’s Cathedral and the nearby gardens, notes Palmer.

Of the challenges involved in the development of the hotel, Palmer says that one of them has to do with the fact that The Murray is an iconic landmark and a high-profile preservation project, as such will include working around structures and spaces that should be kept in its original form.

"For instance, the tower’s unique window designs which, being in a conservation building, people will naturally want to see remain," he says. "However, the fixtures were meant to deflect sunlight and enhance the building’s energy saving, which garnered praise and awards in its day. We will have to use our creativity and experience to strike a balance between sunlight and comfort, style and conservation."

The Murray will cater to all types of luxury travelers from major markets in the region as well as Europe and the Americas. “The Murray team has already been travelling to important tradeshows and feeder market destinations to ensure the word is out to key market leaders, corporate buyers and third-party suppliers,” shares Palmer. “While discussing our plans, we have received very positive feedback and are already receiving enquiries way ahead of the opening.”