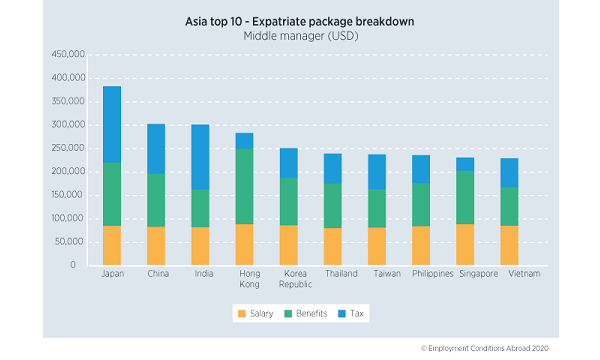 The average cost of employing a mid-level expatriate worker in the region is at $2.23m.

Hong Kong expatriate pay packages continued to grow throughout 2019 whilst the cost of employing expatriate staff in most other locations dropped, according to an ECA International study, and ranked as the fourth most expensive market in Asia for employing expats.

It lags behind Japan, China and India, but outpaced South Korea, Thailand, Taiwan, the Philippines and Singapore.

“Hong Kong stood out against the global trend of lower expatriate packages in 2019 and is one of the only locations in our rankings that saw all aspects of the average package increase” said Lee Quane, regional director – Asia at ECA International. “Though this increase is positive news when compared to the rest of Asia, and even the world, the rate of increase, at 1.2%, was significantly lower than in previous years”.

He further noted that this was representative of the weakened global economy in 2019. Moreover,the average expatriate package in Hong Kong is unlikely to grow for the foreseeable future amidst the COVID-19 pandemic.

The report added that when considering the cost of an expatriate pay package, companies should factor in three main elements: the cash salary, benefits—such as accommodation, international schools, or cars— and tax.

Meanwhile, China remains the third most expensive location in the world in which to employ expatriate workers, despite the overall cost of employing an expatriate package in the country dropping by over $46,502 (US$6,000).

“The main reasons for this drop are the weakness that the Chinese yuan has experienced over the past 12 to 24 months, coupled with the fact that the economy slowed in 2019 due to the ongoing China-US trade tensions. This in turn has put pressure on benefits costs, such as accommodation,” Quane added.

In addition, Singapore remains a fairly reasonably priced location when employing expatriate staff, with the overall cost of employing a mid-level expatriate employee standing at $1.8m (US$232,454).