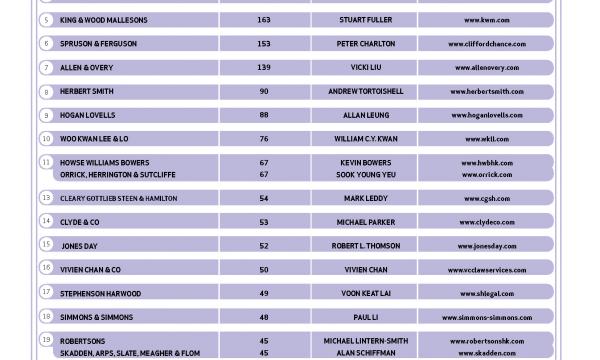 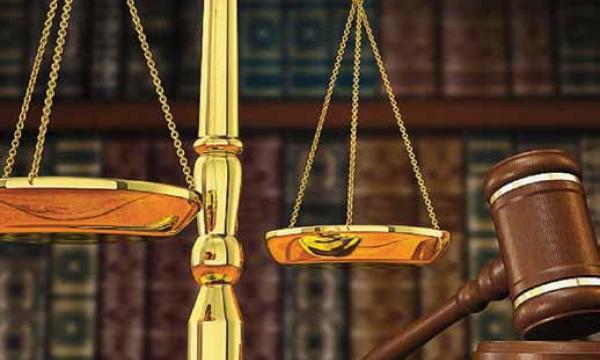 The biggest local law firm was Woo Kwan Lee & lo but only came in 10th in the list with 76 law professionals.

Together the top 25 law firms employed 2,575 people in Hong Kong, according to figures compiled by Hong Kong Business. The average number of employees in the top 25 firms was 63.

Key deals for the top ranking Baker & McKenzie over the last year included advising Yuexiu Group on the investment by Yuexiu REIT in Guangzhou International Finance Center, one of the ten tallest skyscrapers in the world; China Eastern Airlines on its US$198 million 50/50 joint venture with Australian carrier Qantas Airways to establish Jetstar Hong Kong; and State Grid Corporation of China on the acquisition of seven high voltage electricity transmission assets in Brazil.

Other deals of note included the US$200 million global offering by DYNAM Japan Holdings, one of the biggest pachinko hall operators in Japan as well as for Cheung Kong Bond Securities on the issue and offering of HK$1 billion 5.25% guaranteed senior perpetual securities.

Coming in second was Deacons with 252 law professionals. Deacons executive partner Jeremy Lam said 2012 has been a busy year for the firm, especially for its Corporate Financepractice which has defied the general market trend of a slowdown in capital markets work. “One of the highlights of the year was advising Dynamo Japan Holdings on its global offering and Main Board listing on The Stock Exchange of Hong Kong, the first Japanese incorporated company to achieve a primary listing in Hong Kong,” he says.

Rounding out the top 3 was Mayer Brown JSM employing 200 law professionals. Some notable deals that Mayer Brown has in the past year include advising Nestlé on its acquisition of Pfizer’s infant nutrition business for US$11.85 billion, which was one of the largest acquisitions announced to date in 2012.

Coming in fourth was Linklaters employing 183 law professionals. Linklaters has advised the China Minmetals Corp, one of the world’s leaders in the production of zinc.

The group acted through its subsidiary Minmetals Resources, a Hong Kong listed Chinese company, concerning its $1.3b public tender offer of the total capital pertaining to the copper manufacturer, Anvil Mining. It is also one of the law firms which acted on Astro Malaysia Holdings’ $1.5 billion initial public offering, Malaysia’s third largest IPO this year.

The firm employs a total of 163 law professionals in Hong Kong, but boasts of a much larger Chinese presence and partner David Bateson notes that it’s the first firm to receive a license to practice Australian law, Chinese law and English law.