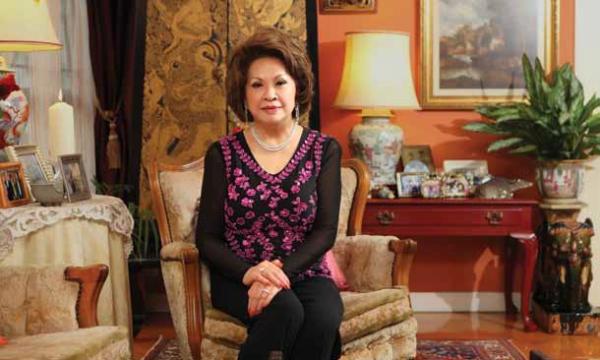 Perhaps it is not in our culture to openly admit our emotional needs, articulate our feelings and seek help… perhaps invincible people like ourselves cannot be vulnerable… or perhaps some charlatans have been giving the business a bad name … Whatever the reasons and for the longest time, the word “matchmaker” has always been associated with negative connotations in Hong Kong. Eyebrows would be raised by sheer mentioning of the word just as animated discussions would drop to whispers, even those who secretly yearn for services would deny it in public and feign disdain. Then amidst those who snicker and sneer, she came along and dares to make matchmaking respectable.

Celebrity matchmaker Mei Ling Ng Liu is the founder and Managing Director of Hong Kong Matchmakers. Speaking five languages, Mei Ling has had an exciting career across three continents prior to matchmaking - she was a university lecturer, a senior corporate executive and a successful entrepreneur. In 2007, she sold her business and in semi –retirement, decided she would champion the cause of Hong Kong women who for years, have been suffering the unfair disadvantages caused by gender imbalance. Mei Ling attended, and was certified by the Matchmaking Institute of New York, the rest is history.

After she published her book How To Find A Husband (distributed by Bookazine), the immediate fan who rushed to include her in a documentary was Première Paris, the French TV show aired during prime time and won instant accolade . CNN & TVB Pearl followed, and finally TVB Jade included her in a 10 x episode reality show Brides Wannabe (initially named “How To Find A Husband”) which took Hong Kong by storm and made Mei Ling a star. The show smashed all rating records in Hong Kong, China, S.E. Asia and North America. The euphoria went on for months, albeit not everybody in the show was lucky, in fact many faced harsh and unfair criticism both from the public and from the media, a few even had to skip town. Somehow, Mei Ling was the only person who came out of all these unscathed. She is well loved and deeply respected by the general public for her refreshing candor and no-nonsense approach to relationships, and continues to command a huge following. Today, not only is Hong Kong Matchmakers the largest , the most prestigious and the most successful company in this business in Hong Kong, Mei Ling is also a reputable author, a radio show host, a popular columnist for the HK Economic Times’ ETNET and a frequent guest speaker at major events.

There are many dating services and matchmakers in Hong Kong before you, so what makes you different ?

“ We don’t try to be everything to everybody, we focus on one small segment of the market only, give it all we’ve got, do it properly and do it well. ” replied Mei Ling.

Hong Kong Matchmakers specializes primarily in the market of mature professionals, entrepreneurs and senior executives in the higher income group. They only accept legally single university graduates who have passed their mandatory Background Check and personal interview with their Consultants.

To be a Consultant in Hong Kong Matchmakers, the minimum criteria include two university degrees, prior experience in senior executive level, tech savvy, a people person, good communication skills, strong in networking, 50 years old or above, and herself happily married for a minimum of ten years.

Asked about the men/women ratio in her database, Mei Ling said proudly they maintain a constant balance of 50/50 – not by luck, but by sheer hard work. For instance, when the balance began to tilt earlier this year, they posted a notice in their website www.hongkongmatchmakers.asia immediately, suspending all registrations from women, while remaining open to men. Apart from HK, their overseas offices are constantly promoting registrations from men from all over the world, very especially HK Chinese men who work and reside outside Hong Kong.

The primary agenda is matching of course, but apart from which there is a dazzling, impressive menu of some 50 different kinds of supporting services available, the extent of coverage varies according to the level of the Plans. These include all things imaginable, from make up, hair styling, photography, personal trainer, image consultation, date coaching, counseling to wine appreciation, geography, history, specific sports, cooking, sex education…you name it. Assuming a lady would fall in love with a German from Munich, not only will she learn in the shortest period of time that the Bavarian clock ticks anticlockwise, she will also learn key German phrases, how to eat white sausage with sweet mustard and wash it all down with a stone mug of Loewenbraeu… such is the extent of their service.

Finally, a question that most of us have been itching to ask: why would a decent, successful, eligible bachelor come to you for help?

The same reason why he goes to a headhunter, a real estate agent or a travel agent. He can certainly do everything himself, but agents are specialists, more efficient, saves him time and hassle. We do it full time, professionally and on purpose, sure beats him doing it part time, half heartedly, by chance.

In Hong Kong, if you are a party animal, a young & sociable hunk, you could make a hundred friends a month, but not everybody is that gregarious or hunky for that matter. Frequent travels plus long working hours make things even more difficult. Where else would you go to meet an entire group of vetted, like minded potential candidates all wanting the same thing you do without ulterior motives?

What advice would you give women seriously looking for husbands?

I would say remember the four “A’s” – Age, Appearance, Aptitude and Attitude.

AGE – 90% of Hong Kong men are hypersensitive to the numerical age of women. For ladies over 35, it certainly helps to maintain a young mind and a youthful, positive attitude towards life.

APPEARANCE – Beauty may only be skin deep, but if he is not already attracted by the cover, he is not going to read the book.

APTITUDE – Many “ educated & successful” women are only experts in one field, otherwise boring, ignorant & sometimes even stupid about everything else. Learn to be interested to be interesting.

ATTITUDE – Ditch your princess attitude and foul temper or he’ll ditch you. If you are serious about finding a life partner, get off your high horses, stop fantasizing and learn how to give in order to get.

The following findings have been calculated based on a combination of government statistics, 2010 census, the actual computer analysis of our huge database over the past 5 years and the laws of average:

So ladies, if you are sociable & seeking men with the above criteria, there should be 1.7 men in your district. More if you lower your requirements and less if you increase your demands.