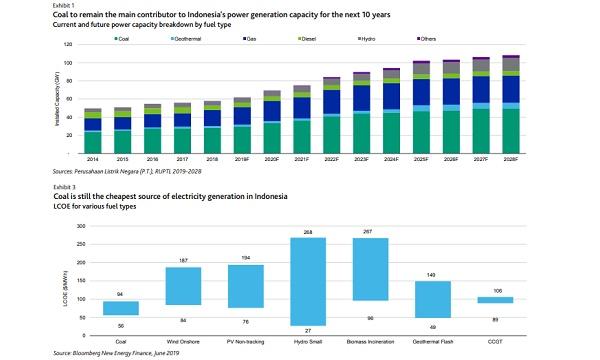 It poses a problem on the government's renewables push.

Indonesia may struggle to achieve the 23% target of having its primary energy needs come from renewable energy by 2023, as the share of coal in power generation is set to increase to 67.8% in 2022 from 60% in 2018, Moody's Investor Service reported.

The share of renewables in the country’s energy mix is currently at 12%.

Moody's noted that there has been a lack of consistency in policy and regulatory framework, which has exacerbated the uncertainty associated with renewable energy projects.

Also read: Will Indonesia keep its unrelenting grip on coal?

In addition, tariffs for renewable energy projects are fixed at 85% of the average tariff of power in each province. The country also requires the use of local components in these projects.

The slow adoption of renewable energy has also been attributed to the threat of stranded coal and oil-based generating projects of Perusahaan Listrik Negara, the largest generator and only off-taker for independent power projects in the country.

However, some banks and financial institution has actively kept from incrementally lending to coal projects.

Indonesia has plans to add 50.4GW of new power generation capacity over the next decade, taking its installed capacity to 108GW.