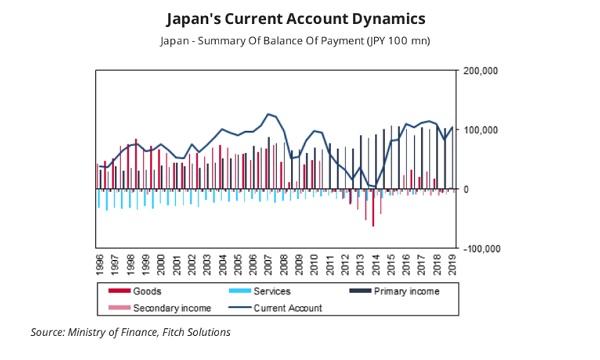 Export growth is expected to drop 1.2% this year.

Japan was reported to have maintained a current account surplus due to its income surplus growing to 3.8% of GDP in 2018 from 2.0% in 2004. This trend is expected to continue as long as it maintains the negative interest rates adopted by the Bank of Japan.

However, goods account surplus has been shrinking since 2007 and is expected to continue in light of heightened trade tensions.The US and China are the country’s largest trading partners, receiving 18% and 20% of the country’s exports respectively.

In addition, the consumer boycott of Japanese products in South Korea could affect the country’s current account, as South Korea account for about 7% of Japan’s exports.

The upcoming Tokyo Summer Olympics is also expected to bring a 25% jump in the number of visitors to 40 million in 2020 from 2018.