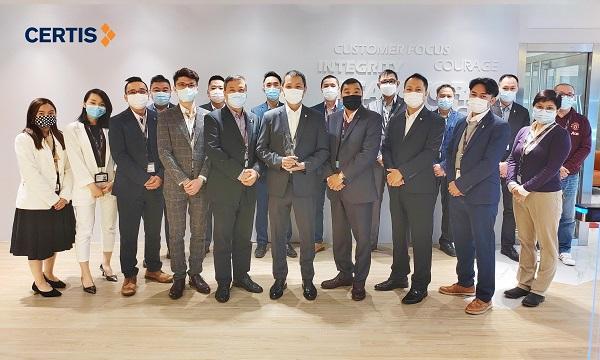 Its team had to be flexible in embracing new information and reworking solutions amidst political protests.

Certis Hong Kong and Macau has secured the Team of the Year – Consulting award at the recently concluded HKB Management Excellence Awards for overcoming the challenges posed by the protests that started in June 2019.

Now in its third year, the awards event lauds trailblazing individuals and teams whose initiatives have brought tangible business gains for their company's operations.

Despite being faced with a hostile environment wherein standard procedures could no longer be applied to maintain operations and ensure employee safety, the advanced integrated security organisation’s operations team in Hong Kong and Macau were able to reframe their approach and proactively communicate with one another on their new approach.

“One of the clear directions given and reminded constantly was that we had to remain politically neutral during the course of work whilst exercising empathy with the stress that staff might have to go through outside of work,” the firm said.

As part of its planning, a set of assumptions were made and put to the test whenever a new scenario arose, or a new set of rules were established by authority. The firm’s operational team had to be flexible in embracing new information and prepared to rework on solutions despite it being a continuous and tiring process.

The firm was also able to successfully tap into the expertise and framework of its HQ resources for crisis communication guides and provide additional helplines for guards experiencing emotional distress. Communication to team members came directly though supervisors and managed by suitable spokespersons.

For the company, its leaders’ presence on the ground was even more critical to lend support and confidence, as well as manage situations personally there were unexpected. Their presence was also necessary to help prioritise the tasks and create bandwidth for teams to handle the crisis.

“It was a protracted operation which was intense and took a toll on the people quickly. As stress and fatigue built up over time in heightened state, leaders found their ability to process ever-changing information and to be level-headed diminishing,” the firm said. “Proper planning for a leaner structure, roster and prioritisation of tasks were critical to ensure they had sufficient rest and space to stay focused.”

To ensure effective turnarounds, a sense of empowerment was also necessary for leaders to make decisions away from the hierarchical structures of chain of command.

An architecture of decision-making was quickly established so that accountability was clear, and decisions were made by appropriate people at different levels. They were equipped with a set of clear boundaries and contingency plans to execute their orders. Overtime during the crisis, crisis-response leaders emerged.

Meanwhile, with communication to clients and customers being equally important to provide assurance and established rules and procedures as the situation evolved, Certis’ operational team collected and amplified positive messages and celebrated small successes to keep up the momentum and motivation. This was especially critical in an environment where fake news online generated by interest groups clouded judgments and thus, negatively affecting response action plans.

As a result, the firm saw its operations team’s penetration succeed with 11 more sites with four more business fields. As well, the size of its team has increased by 100% since 2018.